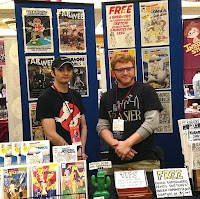 My brother Kyle joined me on producing Amazing Arizona Comics a few years ago, coloring every issue from that point both forward and backward. He lives in Connecticut, but, like me, he grew up in Arizona, so he's very familiar with much of the subtext of our stories.  Here's a rare photo of him and me at a comic con together (specifically, the Small Press Expo in Maryland).

Incidentally, you can follow all of our video production projects on our YouTube channel, KazBro Productions, including our comics-themed miniseries Kirby For A Day and Phoenix's own talk show, Phoenix Tonight.  Subscribe to see more motion comics, coming soon!

Posted by KaraokeFanboy at 9:37 AM