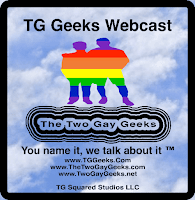 Amazing Arizona Comics Month is already sweeping the Internet!  My thanks to the The Two Gay Geeks Webcast for featuring me in last weekend's Spotlight Sunday post.  Keith and Ben have become great friends these past few years, and I'm always thrilled to see them at local geek-oriented events.  Their love of all things pop culture, from cinema to local comics, is inspiring. Listen to their podcast and read their reviews. These guys will entertain you with what entertains them!

And now, as promised by the title of this post. . .

If you're an avid reader of Amazing Arizona Comics, you know that Speed Cameron was once reckless teenager Cameron Wheeler, and that he was struck by a monsoon lightning bolt and flashed by a traffic camera simultaneously to become the tech-headed speedster we know today.  If you've heard any of my many interviews about creating these minicomics, you know I deduced his existence by getting flashed three times by traffic cameras on the I-17 one night shortly after moving back to Arizona in 2010.  (For the record, I was going about 65 mph, where the speed limit is 55 mph.  Needless to say, I was more accustomed to Southern California freeways at the time.)

After the traumatic experience wrought by that trinity of bright flashes, I tried to draw what I thought Speed Cameron must look like.  Before I realized his true form, with the camera as a part of his head, I sketched a young man with a camera merely strapped to his head.  These sketches have appeared in Amazing Arizona Comics: Declassified #1, but here's a snippet from that section of my sketchbook.  Interestingly, I was also musing about what some other local super-powered folks might be called.  You can see (now former) Sheriff Joe Arpaio's Tent City was an inspiration, but I was pretty close to landing upon Cameron's friend, June Monsoon.  We'll save her for another post.

I've thought a lot about what inspired Speed Cameron's final look, considering how many variations I drew of "kid with camera on his head."  As I've thought about the stuff I studied as a young superhero fan, I've remembered something I liked very much -- though not in comics or cartoons.  I'm talking about Bryan Adams. 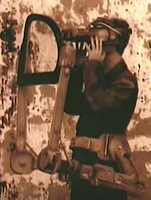 I really liked Bryan Adams in the '90s, especially his Waking Up the Neighbours album.  One of its hits was the ballad "Do I Have To Say The Words?" and in that video, a chauffeured Adams spots a girl on a crowded street. Strangely, he fantasizes about fantasizing about her.  That is, on another plane of existence, the car becomes an elaborate VR rig, with goggles and a car window shaped view screen.  As a 13-year-old, I really liked this video, and considering its rampant vehicular and elaborate headwear themes, I have no doubt "Do I Have To Say The Words?" bubbled from my subconscious 17 years later to help create my impression of Speed Cameron.

What better way to conclude this unique insight than by sharing the video itself.  As you watch, catch the first line of the song: "Rescue me . . ."  Perhaps, as I was "speeding" down the I-17 that fateful night in 2010, Speed Cameron was one of those flashes, wordlessly rescuing me.

Posted by KaraokeFanboy at 8:00 AM