The Secret Origin of Wigwam, part 1 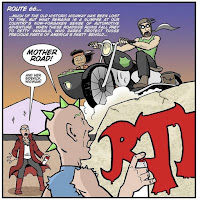 We can't explore roadside attractions, specifically in Arizona, without discussing Route 66.  I love America's mother road -- so much so, that I've gleefully elected to tell the adventures of Mother Road, Defender of Route 66, in Amazing Arizona Comics.  A short Mother Road adventure appears in the latest issue of Amazing Arizona Comics, which will be available at Phoenix Comic Fest later this month.


Mother Road usually doesn't travel alone.  Her sidekick, Wigwam, rides and fights at her side.  Where would a hard-traveling hero like Mother Road meet a practically living cartoon like Wigwam?  Well, his is an interesting story that has never been told . . . until now. That's right, you're in for a three-day analysis of Wigwam's origin, which, unsurprisingly, starts on Route 66.

A few years ago, the Sedona Sorceress, Crystal Vortex, was vexed by struggling businesses on America's most historic highway.  She attempted to cast a spell to bring some "life" back to the road, but the spell manifested itself quite literally.  The roadside giants that attract photo-happy tourists came to life, charging on a populace that all but forsook them. 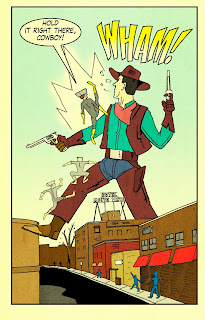 Fortunately, Speed Cameron raced northward from Phoenix and held the line agains the likes of the Two Guns Cowboy, the Jack Rabbit, and a horde of Holbrook dinosaurs.  Fortunately, Crystal thought of a spell to reverse her first one, and since the sentient statues stayed so close to the highway, everything went back to normal easily enough.

Well, most of the attractions stayed near the highway.  Some of the newly living roadside legends wandered a bit from the beaten path, and perhaps weren't affected by Crystal's reversal spell.  Stayed tuned . . .

Bonus!  If you'd like to read this original strip in its entirety, just click here to start!

Posted by KaraokeFanboy at 10:00 PM