Why do I have such a fascination with roadside attractions, specifically giant statues? Why would I dedicate a whole week of Amazing Arizona Comics Month to them? Simply put, the giants that adorn America's freeways are all the evidence I need that the line between our reality and the realms of superheroes is a thin one, if it exists at all.  Just look at Jack Kirby's interpretations of alien worlds -- or Howard Porter's amazing visuals from Wonderworld in Grant Morrison's JLA: Rock of Ages.  Everywhere, giants, and statues of giants!

In America, we have a few beloved giants.  Some are jolly and green.  Others wield axes and hang with blue oxes.  That's Paul Bunyon, of course.  In the '60s, a fiberglass company decided to pay homage to Bunyon by making statues in his honor, and the fad became commercially successful.  Businesses began using specialized Bunyons to promote their services; the first was, appropriately, the Paul Bunyon Cafe right here in Flagstaff.  Since many of the businesses that displayed Bunyons were auto shops or gas stations, the statues became known as muffler men.  The robotic constructs I featured yesterday may share the "muffler men" moniker, but these Paul Bunyon statues were the first. 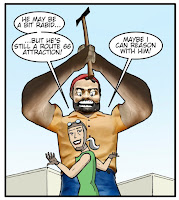 If America's giants are our connection to the superhero adventures going on around us, Arizona is certainly the national capital, since our highways are littered with dinosaurs, cowboys, jackrabbits, and, yes, muffler men.  I've personally beheld four former-Bunyons, in Flagstaff, Prescott, Phoenix, and Tucson. That's a remarkable boast for a singular state, considering their rapid decline and disappearance.  While these statues represent America's bold, noble spirit, I've wondered what might happen if their power was harnessed for evil.  That investigation became Amazing Arizona Comics #13. 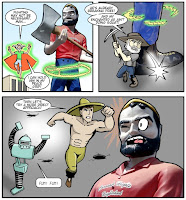 Amazing Arizona Comics #13 actually collects three different Free Comic Book Day stories from 2015, each taking place around a different muffler man.  Flagstaff's muffler man is NAU's lumberjack mascot.  Phoenix's muffler man is a part of a giant collector's front yard collection, and Tucson's promotes an auto shop.  Each of them are in very public places, holding axes.  If a magical spell were to animate them, they could be a danger to us all! Fortunately, the Arizonauts exist to prevent just that.

If you know of any Arizona giants that may have been (or perhaps one day may be) the focus of a superhero adventure, please share in the comments below!  I may have traveled many of Arizona's highways, but I haven't seen them all.  That may be a task too giant for one man to tackle!