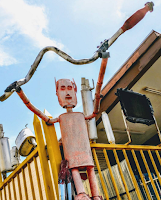 Author's Confession: Today's entry for Amazing Arizona Comics Month is essentially a re-post.  I talked about Phoenix's roadside "muffler men" in April 2017, but for this week's focus on roadside oddities, I thought they'd be worth a second look . . . especially since they're loosely affiliated with another roadside inspiration -- but we'll get to that in a moment.

Muffler Men are basically humanoid constructs built from car parts, often used as roadside beacons for desperate drivers in need of a body shop.  They're the stuff of mad science, without the mad science that could bring them to life -- as far as we know.  You see, in Amazing Arizona Comics #24, some evil, animated Muffler Men make a brief appearance fighting the Agents of F.L.A.G.  I hope to reveal how they were been animated in future stories, but in the meantime I've spent a significant amount of time scouring the Valley to study their diverse designs. 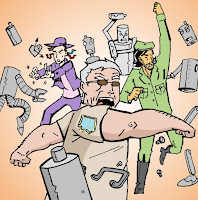 That's kind of why I love them.  Unlike the relics of Route 66 (and, believe me, we'll get to those, too), Muffler Men can found right here, in our own backyard, and the questions they pose speak not only to their origins, but our own. 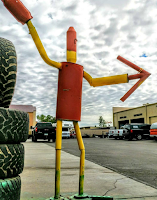 Like, who was the first person to build a muffler man? Was he taking a call to recyle as far as it could go, or were his plans more nefarious?  Perhaps, so it goes throughout history, he was trying to re-create and harness the power from a myth of the past . . . something bigger than any of us.  That myth?

Paul Bunyon.  To be continued, tomorrow!
Posted by Russ Kazmierczak, Jr. at 8:00 PM