What Is Family Fun Bot?

If you've driven through the small town of Eloy, between Phoenix and Tucson on the I-10 freeway, you've undoubtedly spotted the remains of Family Fun World, a multi-faceted theme park that never made it to opening day.  According to the blog The Weird AZ Challenge:

This property was purchased by Richard Songers in 1995 with the intent of creating an amusement park, zoo, race track and concert arena, this extravaganza was to be called Family Fun World. But after several years of development Songers was forced to give up the Family Fun World dream for lack of funds.

For years, one of the remains of Family Fun World was a robot that stood right on the edge of the highway.  The best image of the robot online is by Jeremiah Ellsworth.  Check out his Flickr for more amazing pictures.

The robot has since disappeared, and many wonder why.  Some assume vandals are to blame. As the author of a superhero comic book, my theories are a little more controversial.  I presume that the robot has achieved sentience and now fights alongside the Arizonauts.  I don't blame you if you don't believe me, but I've chronicled Family Fun Bot's meeting with Sam Brero, so take it or leave it! 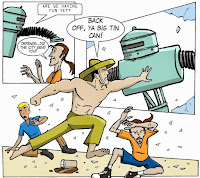 Of course, I once travelled to the site of Family Fun World, and despite "No Trespassing" signs, I felt it was my duty to discover the truth.  I documented the experience, and, I must admit, my footage is some of the best shots of those forbidden grounds you'll find anywhere.  The roadside robot and baskets are well documented, but here's a look at everything else.  If your interest is piqued, the whole story of Family Fun Bot's first meeting with Sam Brero is documented in Amazing Arizona Comics #16, available now.